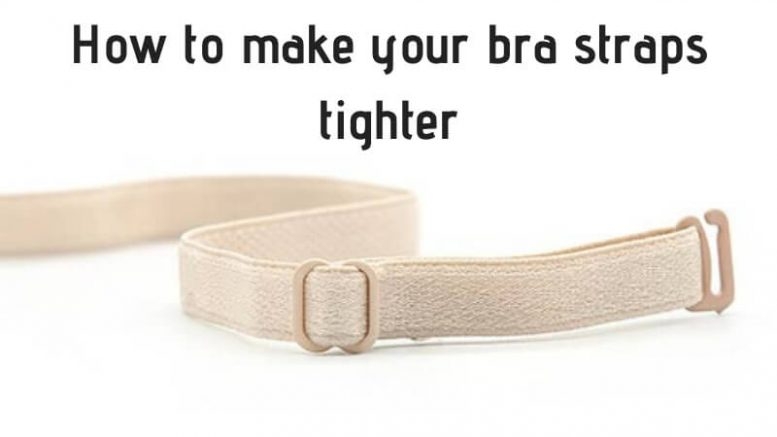 The most satisfying part of wearing a bra is to have a perfect fit bra. How to make bra band tighter is today’s topic and we will talk about ways to tighten the bra band. Bra band can be the best friend or maybe the enemy when you wear a bra. When the bra has ill-fitting that can ruin the whole situation. Whether you have to adjust it over and over again or maybe you go outside braless sometimes for the comfortableness.

You have to tighten your bra in a way that can provide a comfortable feel. You have to be careful about if it’s leaving red impressions on your shoulder or slipping off from the shoulder. If it happens then you must have chosen the wrong bra cup size or may be the wrong bra band size. So, choosing the right size bra is a must and after that, you can make the bra band tighter if it needs to be tightened. For making any further late let’s talk about how to make the bra band tighter in detail. To make your bra band tight you should follow some ideas for the bra fitting. Most often you need to tighten the bra when you have a loose bra, when your bra loses elasticity power, and who have narrow shoulders. There are lots of options in front of you to try to make the bra band smaller or tighter. Let’s talk about the first idea. The first thing is deciding how much you want to shorten or tighten the bra band.

Take a measure you want to shorten. After that Unpick the stitching on the hooks and eyes. Use a scissor or a stitch unpicker. Cut those stitches or you can also rip those stitches perfectly. Make sure you don’t cut the necessary parts or it may make you suffer from readjusting this. Then sew on the hook and eye part by the sewing machine but make sure you can undo the work for adjustments. Try to start from a long row of stitches to untie to ease the band out. After that, you have to cut the band down to size with the scissor. You have to be careful about cutting or it may ruin the whole bra. You have to fix it first then go for the sewing part. Otherwise, it will wrinkle. Then you have to make the bra band ending part narrower so that it fits inside. You have to fold the edge of the fabric for sewing the elastic back. Complete the sewing part of the hooks and eye back. And you are done making the bra band tighter. It’s a very much effective sewing idea when you need to tighten the bra band.

Let’s talk about bra band without sewing ideas to make the bra band tighter. When you try to alter a bra you need to hook your bra on a tighter notch and also you have to loose the bra straps. Too much tightening can cause you pain and it lifts your breasts up but leave redness on your skin. If you see that your bra band is still too big after trying for a proper fit then go for the perfect fitting band size. If you don’t know that 85%-90% bra support comes from the bra band. So pick a perfect bra size with having a snug band.

Tightening the bra is a major idea but it’s workable if the bra is the perfect fit and you just need to adjust the looser band. If it’s too loose a band then choosing the tightest hook won’t work out. Before tightening the bra you should check some things like whether you need a new bra or not, fastening the bra on a different hook from the loosest hook, pick for the bra sister size, or if you cannot tighten the bra on your own then give it to a trailer. Oh! We forget to say something special. You can use a Rixie clip bra band tightener as the most effective idea. There is a metal or plastic clip slide adjuster for sliding up and down the length. There is adjusting and tightener option available.  Most often you need to tighten your bra when you are in the wrong size or maybe the problem is in the bra. You need a tighter band with a perfect cup size. But make sure you don’t choose a too-tight band. If you need a comfortable feel then pick a larger band for comfort. But for perfection, you have to tighten the bra band. One more thing we want you to know is a woman with heavy breasts cannot get enough benefit with s tighter band. Maybe they need a larger cup size and perfect band size according to their bust size.

We hope that the article is very much helpful for those who need to make their bra band tighter. All you have to check if your bra needs to change or adjust. So, tighten your bra perfectly so that you don’t need to face the bra loose problem or too-tight band problem. If you are ignorant about the bra band tightening issue then give it to someone who can fix this. So, buy the perfect fit bra from the lingerie shop according to your need. And complete the bra band tightening method if necessary. We hope you will be able to do it by yourself. Good Luck!

Q. What is the bra band?

Ans. Bra band is the most necessary part of a bra. A bra has bra cups, bra straps, bra band where the bra band works as a supporter.

Bra band that runs around the rib cage of the bra wearer. In the front of the bra band, the bra cups are attached, bra straps in the back and in the center of the bra band where the hook and eye closures typically exist. It is said that about 85-90% of bra supports come from the bra band.

Q. How To Tighten Bra Band Without Sewing?

Ans. Tightening the bra by sewing is the most common idea. Except for this, you can use the adjuster or clips like Rixie clips to tighten the bra band.

Q. Why is a firm-fitting band important?

Ans. It is said that about 85-90% of bra support comes from the bra band. A firm-fitting band is important because it perfectly supports your breasts. It’s not the cups or the straps it’s the firm-fitting band that’s necessary.

Bra band should be snug. A loose band can give you enough comfort to those who have big busts. Also, it can give a comfortable shape as well. But the too-loose band is not supportive. Even they can make you suffer as your bra cups will fall down every time. But if it’s tight enough to give you a perfect fit that’s better. So, if you are looking for a lift then firm bands are perfect.

Q. How to make a sports bra band smaller?

Ans. The sports bra is a kind of bra that is perfect for women when they attend to do physical exercise. It provides perfect support to a women’s breast. So that when they do exercise, the bra can minimize the breast’s movement.

We are sharing the ideas to make a sports bra band smaller. So, if you want to tighten the sports bra you have to attach normal bra snap hooks. Then sew in an elastic band into the bottom part of the sports bra. After that shorten your bra according to your need. And you are done.

Q. Why is my bra band so tight?

Ans. Most often you face the bra band too much tightening problem because of the wrong size or maybe for ill-fitting. Whether you need to adjust it or change the bra size according to the perfect band and cup size.

It is true that the bra band supports the most when you wear a bra. If the bra band is too loose then you need to tighten your bra band. Sometimes for quickness, you tighten it too much that made you suffer. You should adjust and tight it properly for a comfortable fit. Or if it does not work then you should go for a bigger band size but do not change the cup size. It any red impression is left on your shoulder or skin it happens for choosing too much tight bra band. So, make sure you choose the perfect band size.