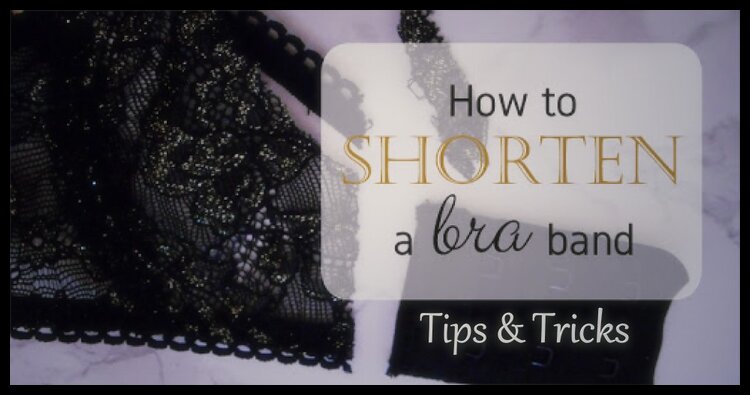 How to make bra band smaller

It’s a common complaint that why my bra is too loose? Why it is digging into the shoulder? How to fix it? Actually wearing the right size bra is a pleasure. But if you buy the wrong bra style and wrong size bra that makes you suffer. That is why we are here to share effective ideas about How to make a bra band smaller. It’s not a difficult task so just read out the whole article to know all the tips and tricks to make the bra band smaller for a good fitting.

You might have asked on the internet about bra band adjustment or band fitting  You might be struggling for the wrong band sizes and now you need to shorten the bra band. You are exhausted because you don’t have any idea about how to make a bra band smaller. Just go through the whole article to get enough knowledge about making your bra band smaller. Why do you need to make your bra band smaller?

It’s because of picking the wrong bra size that has wrong band sizes or cup sizes. Bra fitting is an important part of when you wear a bra. Most of the support comes from the bra band. Bra cup sizes are important to keep your breasts in place. But if your bra band size is not ok then you have to make it smaller. About 90% of the supports come with a bra band.

For example, if you are 34C, you have to choose a bra that is 36B or a 32D. For sister sizing, smaller bands and large cup sizes, or larger bands and smaller cup sizes will get benefitted more.

What to do if bra straps are falling into the shoulder?

If you see your bras straps are falling into your shoulders, then it’s because the cups are too small. Also, if your band is too loose then your bra straps will fall too. As we are talking bout bra band tightening tips so make sure your bra band is snug, not too tight and not too loose.

For the right fitting, you should check if your finger fits between your back and the strap about an inch. If you see your bra underwire is digging and squeezing in your breast tissue it indicates your bra band is too small. So you need to readjust it and lose it.

You should also know that different bra styles provide different fitting. So you have to choose your bra according to your needs.

For smaller breasts or if anyone has a narrow shoulders, they have to pick the bra size wisely, or maybe they need to adjust the bra. So you need to follow a few things to see if your bra band is perfect or you need to adjust it.

Mistake We do When Choosing Cup Size

Altering the bra is the best solution but before that, you should try loosening both straps and hooking your bra band on the tightest hook. Wearing a properly fitting band makes you feel comfortable. Determine how much you need to shorten or make the band smaller. Try to adjust them from the smallest hook and eye setting.

With the band unclipped, put on your bra. for the perfect fit in the back pinch both of the ends of the backside. Draw lines on each band 1 inch from the points where you have pinched. This 1-inch gap is made so that you can sew the clasp back later. You can mark the band on your own. You can also put the bra on backward and mark the band. This idea is good for small-breasted women.

After that, use a pair of scissors or any other sharp item to remove the fabric that attaches the bra clasps to the band. Cut off the band along with the lines. clean the excess materials on it. Complete the sewing part of the new end of the back into the clasps. If you have a sewing machine then it’s better to use a zigzag stitch. Hope you will be able to get a good fitting bra. Make sure you take the right measure and made your bra band smaller.

So we have discussed How to make a bra band smaller. All you have to do is to decide how much you want to shorten your bra band, unpick the stitching from the hooks and eye, cut the band down to the size you want, make the band end narrower, sew the hook and the eyepieces, and done!

Other Methods to Make the Bra Band Smaller

You can also follow some other methods to make your bra band smaller. You will need a leotard back bra, a bra band extender, a seam ripper, a sewing needle, threads, scissors, pins, measuring tape. It is almost like the sewing method but not with hand but with some extra care and extra tips. Or if you don’t want to struggle then you can buy a Rixie Clip Bra Band Tightener as Rixie clips can help you to adjust the bra easily.

Dear, shoulder straps digging in problem is a mess! The Ideas we have shared to tighter bra bands are the most effective ways. So when you choose a larger band size bra that has a loose band/looser band, you should adjust your bra band whether by adjusting them by changing the bra hook or cutting extra parts and sewing the bra band for a proper fit.

So this is the first thing you should follow is to pick the exact bra size/ real size according to your breast size. It is advised to wear your bra on the loosest hook but if it’s too loose then shorten it perfectly and go for the tighter hooks from the loosest hook. You will also overcome the armpit wrinkles problem and irritation as well.

That’s all about today’s article. We have shared the most effective ideas about how to make bra band tighter. So before you tighten your bra make sure you first try to adjust the bra hook and if it does not work then go for the other ideas we have shared.

Just go for bra sizing, determine how much you want to shorten the band, cut off extra materials, complete the sewing method and you are done making your bra band shorter. You will be able to shorten almost any type of bra. Good luck!

Q. How can I make my bra band tighter?

Ans. When you pick a wrong size bra or a bra that has a loose bra band then you need to tighten the bra band for a proper fit. You can easily make your bra band tighter.

Q. What do I do if my bra band is too loose?

Ans. If your bra band is too loose, you don’t have to worry about it. It is a simple problem and you can solve it by yourself.

When you see your bra band is too much tight, you release them a little. Too much tightening can cause red marks and skin irritation. The bra band is the major part that provides the main support. so if your bra band is too loose you make it tight adjusting them into some other hook. or if it does not work then you need to follow some other ideas like cutting and sewing the bra band. If you are not satisfied with the result then it’s better to purchase a new bra style according to your body shape and size.

Q. What is the difference between band and cup size?

Ans. Actually, a bra has some parts and every single part is important when you wear a bra. A bra contains straps, a band, a cup, stretching fabrics, and elastics. Altogether they provide perfect fitting, support, and coverage to your breasts.

Check out the best sports bra for dd cup review

There are some differences between bra band and cup size. A bra band is one of the most important parts of a bra. Bra band runs the rib cage of the wearer. On the other hand, bra cups are attached to the front of the bra band. the bra band that holds your breast from the upper side. For support, the bra band is the main part. Where for breast coverage, lifting and keeping the breasts in place bra cup is necessary.

Q. Which is the best bra to wear?

Ans. you can have various designs and styles of bra collection. So we are recommending the best bra to wear with your beautiful outfit.

So the best bra to wear that deserves to be in your lingerie wardrobe are the t-shirt bra, the balconette bra, the Bralette, the plunge bra, the push-up bra, the bandeau bra, the sports bra or you can also try the strapless bra.